Tasty Duck as Spring Rolls On

Regular visitors birding in the Aldcliffe area may have noticed that the maize fields have yet to be ploughed and seeded, so fingers crossed the lapwings might just get some chicks hatched again this year. That said, I haven't seen many pairs in there compared with previous years - I suppose that's what happens after several consecutive years of nest destruction; numbers go down. Worth noting too that the most northerly of the two maize fields has now been converted to grass production, thus reducing nesting habitat for lapwings. No wonder they, like many breeding waders reliant on quality farmland, are declining rapidly across the UK.

I did get word that a pair of grey partridge had been seen in the fields beyond Freeman's Pools - perhaps they're not quite extinct in the Aldcliffe area after all. However, one pair clinging on for dear life is hardly something to celebrate!

On a more positive note, little ringed plovers finally arrived (better late than never) with the first report from The Flood on April 3. They peaked at 7 on 13th and there were still 5 present yesterday (Easter Monday) but just 2 there this morning. 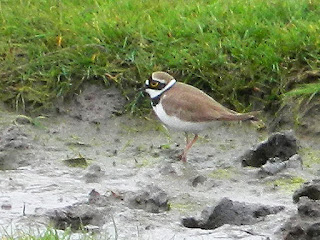 The main highlight from this morning was a cracking drake garganey on the Wildfowlers' Pools. other migrants were pretty thin on the ground, 3 wheatear on Aldcliffe Marsh and another one on The Flood being the only obvious passage birds. I was rather hoping for something of the whinchat / redstart variety (see Heysham Obs blog).
I only counted 3 each of lesser and common whitethroat in the two-and-half hours I was out though blackcaps were absolutely everywhere.
The sedge warbler I heard on Sunday had either moved on or was just keeping quiet.
Of course, there are lots of swallows, sand martins and house martins around now along with willow warblers and chiffchaffs too.

A few other recent sightings of interest from the Aldcliffe area include: osprey, marsh harrier, white wagtail and yellow wagtail