I managed a couple of hours mooching around the patch this morning for the first time in several days. I've been down in Oxfordshire working at the impressively massive event that is BBC Countryfile Live. From the RSPB exhibit I spotted a couple of raptor species overhead, both rarely encountered in North Lancashire; red kite and hobby. In that part of the world of course, both birds are relatively common and a treat for us northerners to see!

Treats, however, were harder to find while birding at Aldcliffe today... hardly surprising really as mid-summer can often be a bit dull in the birding world.
Even so, highlights included the following:
Freeman's Pools - female tufted duck with young, 5 ad & 3 young little grebes, 40+ swifts overhead.
Wildfowlers' Pools - 2 tree sparrows, 1 green sandpiper, 4 common snipe, 6 teal.
Elsewhere the usual little egrets, greylags, cormorants and such were all present and correct. A female sparrowhawk was patrolling the cycle track hedges and a grey partridge was seen with just one well-grown youngster in tow.

A few notable highlights from the past couple of days include the arrival of a very unseasonal whooper swan and the annual mass influx of geese.

For those of you who don't know, the geese that turn up at this time of year are UK 'residents' and their appearance on the Lune estuary is part of the post-breeding dispersal that takes place every summer. From studies, many of these geese are moving a relatively short distance from the Lake District where a number of birds have been individually marked. 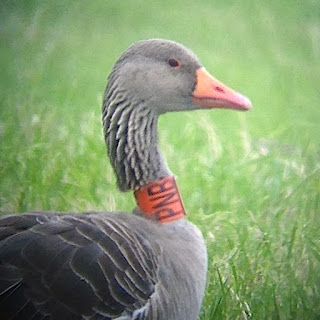 The greylags are fitted with orange collars; each sporting a unique 3 letter code. Of the 450 or so geese in the field by Frog Pond today I could see 13 greylags with collars.
I have sent these to Kane Brides at the Wildfowl & Wetlands Trust who will be able to determine their origins. Interesting eh?
With a little movement around the Lune, and up into the Bay and Leighton Moss, some of these identifiable individuals will doubtless be spotted several times in the coming months.
As for the random whooper swan, has this bird also been hanging around the Lakes over the early summer and simply tagged along with the geese?

The green sandpiper count at the Wildfowlers' Pools was up to four today (an increase of two since yesterday) and a pair of greenshank were flushed off the river by one man and his dog. They flew off high toward Conder. Later, a third bird was flying around Aldcliffe Marsh calling.
A trio of snipe were also at the Wildfowlers' Pools but the Flood was sadly lacking in any waders bar a single lapwing.
At Freeman's Pools the proud tufted duck mum continues to nurture her lone duckling and from a brood of 8 cygnets, just one young mute swan remains with its parent here.

Yesterday I counted a hefty 38 little egrets along the river between Stodday and Aldcliffe. The adult and juvenile peregrine were once again engaged in hunting training over Colloway.

As the returning waders and wildfowl make themselves know, it was the departing birds that were making a fuss yesterday evening. A veritable swarm of approximately 80 swifts were screaming and swirling in a tight flock near my house at dusk - a reminder that they will soon be off back to Africa...