Inspired by Steve, i hope you enjoy these films. I should have uploaded them before. Sorry.
at 15:43 No comments:

A male brambling was good find down here today giving me a patch tick and taking my Aldcliffe list up to about 135 species.
I met up with Steve shortly after and had a productive trawl round in pleasant breathless conditions. The good news is that the smaller passerines seem to have survived the 5 week immersion in the deep freeze. 3 flocks of LTT's were located along with numerous chaffinch and blue tits, about 6 greenfinch and the same number of goldfinch. 3 bullfinch and a goldcrest were on the track leading up to the sewerage works. The only casualty seems to be a redshank at the sewerage works which looks like  it's neck was broken when it flew in to the wire mesh fence. The influx of thrush species have dispersed but a handful of redwings and fieldfares remain with the mistle thrush guarding a haw bush on the walled meadow. A peregrine and kestrel were at the pylons. 12 barnacle geese were on the marsh with PFG's in an inaccessible field sandwiched between 2 hedges and therefore uncountable. 4 goldeneye were in the river and a little egret flew south. On cue, the green sandpiper landed on the flood as we were asking each other when was the last time each of us saw it.
Guy
Skylark 5, Meadow Pipit 1, Pied Wagtail 9, Raven 1. A few hundred Lapwing near gull bank, a dozen or so of each Curlew and Redshank in fields.
Steve.
at 15:31 5 comments:

Another satisfying plod through the winter landscape, started with a look in Freeman’s Wood, a few thrushes and a Woodcock being the highlight. Proceeding down towards the walled meadow I was struck by how many Fieldfare were present, a number of Redwing mixed in. On the river I watched the Wigeon moments before the tide came in. I headed back towards the railway crossing and all the Fieldfare were in the hedges, I then noticed a Sparrowhawk near the gateway. On the way back along the track by the ditch I waited patiently to get the film of the Water Rail, great Christmas treat eh!
Steve
at 13:39 2 comments:

Had a stroll around part of the Parish this morning, the big freeze remains big and freezing! All pools in the area frozen and empty of birds. At marsh point there were a good number of gulls Black-headed, Common and a quite a few Herring Gulls. There were 25 Mute Swans and around 75 Canada Geese. Also present were Goldfinch, Wrens, Robins, Great/Blue Tits, a Bullfinch was near the bottom gate. On the track, I got into position at the top of the rise on the flood defence, I was about to trawl through the geese in the field next to the bund, Pink footed/Greylag, one never knows what might be with them, and as I find this a hard task I was determined to have a good look. Then as soon as began they all took off, then I noticed the dog walker! I managed to film the event, and I challenged them about not sticking to footpaths of which there are many! The response was everyone does it and the farmer doesn’t mind! So what about the geese? They continued, crossed the track and proceeded to continue along the bund. 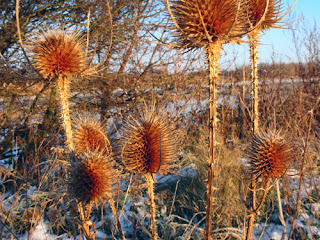 Teasels.
Along the track I saw a good hundred or so Fieldfare, a few Redwing and at least 9 Song Thrush. In the ditch I glimpsed a Water Rail as I hurried on not wanting to disturb anything. A Buzzard was flying over being harassed by a pair of Crows. A Greenfinch was in the hedge along with a number of Dunnock, Robin, Wrens and about 20 Blackbirds.
I headed back via Aldcliffe village which looked very peaceful and Christmassy in the snow.
Steve
at 16:50 1 comment: 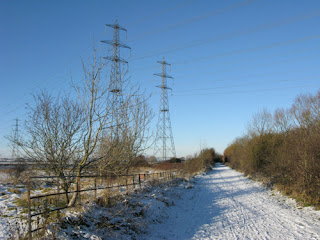 The winter is back with vengeance after a couple of days of slightly above freezing temperatures. On the surface Aldcliffe looked beautiful, clear blue skies under an inch or so of snow and frozen pools. Look a bit deeper and it's a fight for survival. It was bloody brass monkey weather, and I felt it for those birds and animals desperately trying to stay alive in this record breaking cold spell. There were large sheets of ice floating down the river, the banks frozen.
A Skylark was about near the sewage works along with a pair of Grey Wagtails. The main highlight was the influx of thrushes, with Blackbird numbers as usual, but there was a good couple of hundred Fieldfare and Redwing between the cutting and Wildfowlers’ Pools. Also a pair of Song Thrush and a Mistle Thrush made their presence known. I haven't noticed any unusual behaviour as yet, the cold reminded me of last winter when Dan and I had a Song Thrush literally by our feet, no doubt the poor thing was starving to death. Today, however, the birds, what there was, were as twitchy as ever.
On the river I saw a good few hundred Wigeon, a few Swans, Curlew and Redshank. Unsurprisingly there were two groups of people who had taken it upon themselves, and dogs, to walk across the marsh so no geese to be seen!
Freeman's Pools were lifeless bar a few Woodpigeons in the trees. The dead copse nearby has all but disappeared, only one tree standing, a shame as that small area attracted quite a few birds, including Kestrel.
Steve. 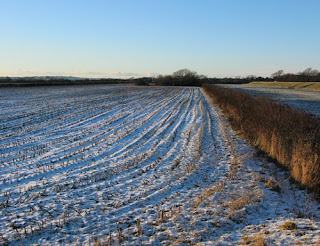 A pleasant day where I was able to take off my hat and gloves. Started from Stodday where a grey wagtail was at the sewerage works. The apple tree on the lane here still has fruit on and is attracting blackbirds and tit flocks. A mistle thrush, which are quite scarce down here, was alarm calling at the walled meadow. Small numbers of redwings and fieldfares were at weedy corner with 2 bullfinch, a song thrush and more blackbirds. A female sparrowhawk was harrassing the starlings and redshank feeding on the "improved" fields. About 300 pinkies were in this area also. A green sandpiper was on the flood. Freemans pools are completely frozen over. There is usually an ice free patch were all the ducks cram in to but even this has  disappeared with the severity of the cold this winter. 2 skylark were heard and then later seen over the pylons. 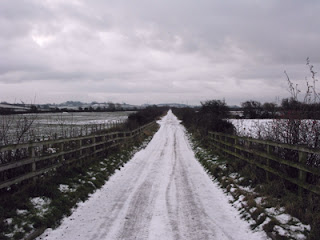 Not your average Saturday morning!
Despite the dodgy looking cloud cover it stayed dry, and a bit of a thaw happening, though one couldn't tell from looking at the pools which were all still solid ice and bird-less. Aldcliffe was unusually quiet, people wise, for a Saturday morning, hardly surprising given the recent spate of wintry weather we have had! I started with a wander through the woods and saw Goldcrest, remarkable considering the cold, how do they survive? Also a good number of Blackbirds present. On the track were Bullfinch, Greenfinch, Chaffinch and Goldfinch. A number of Robin, Wren, Dunnock and Blue/Great Tits in the hedgerow. A good pile of farmyard manure has been dumped in the maize stubble field which will hopefully attract a few birds, only a Robin on there today.
I then bumped into Guy and we headed towards the noise of geese. There was up to three very active Water Rail in the ditch, and a few Redwing and Fieldfare in the trees. There was roughly 900 Pink-footed Geese in the fields opposite the walled meadow, with a number of Lapwing and gulls mixed in.
Said cheerio to Guy and made my way along the tidal wall. It wasn't long before another 1000 or so Pink-footed Geese arrived on the marsh joining forces with the 300 or so Greylag and 275 Canada's. I had already counted 10 Barnacles and another 7 landed with the fresh input of geese, I attempted a trawl through but was getting a bit nippy, anyway at least 17 Barnacles back on the marsh. Also present were a few Curlews, Little Egret, Wigeon, Teal and a flock of 16 Snipe flew north. A further 35 Fieldfare were flying between the hedges near Bank Pool.
Steve
at 14:21 1 comment: