I manged to escape post-flood Lancaster and the pre-Christmas chaos by legging it to Florida for most of mid-December. The warmth and bright skies were most welcome.
I'm lucky enough to have been to this part of the world on a number of occasions and as a result I've seen most the birds that one might hope to encounter in the south eastern states. However, there are always one or two that slip through the net and so I decided to target one of these few birds missing from my list... the rest of our time was spent relaxing and simply enjoying walking around (always with my bins, naturally).
The 'new' bird I wanted was appropriately seasonal too - wild turkey. I've been in lots of places where these avian giants occur but I had so far failed to track one down so, armed with some quality gen I set off in search of my quarry. Fortunately the site was very close to a reserve that I'd always wanted to visit, the Audubon Corkscrew Swamp Sanctuary.
Anyway, without boring you with all the thrilling details of our visit, we did find our Christmas turkeys (a nice flock feeding with sandhill cranes) and also spent a few hours enjoying the many birds, butterflies, mammals and reptiles of the fabulous preserve.

My first visit to the Aldcliffe patch following our return to Blighty was, let's say, somewhat uninspiring. After a several days of being surrounded by pelicans, royal terns, palm warbers,  mockingbirds and painted buntings the soggy, sorry gaggle of greylags and bobbing coot failed to get me excited. Even the massive amounts of water in the fields had failed to attract anything new. I managed to convince myself that a lone chiffchaff, a pair of grey partridge and couple of hundred pink-footed geese were well worth the effort through.

I had my final trawl of 2015 this morning, desperate to close the year with something of note. Of course, the amount of standing water is quite exceptional but given the mild conditions there appears to be very little movement of water birds into the area. Most things simply seem to have moved from Freeman's Pools to the fully submerged Wildfowlers' Pools (ie 18 gadwall, 22 coot, 8 goldeneye). A nice cold snap would hopefully see some notable arrivals.
The only 'new' birds were 3 shoveler (one adult drake, a 1st winter drake and a female) on the flooded fields to the east of the upper cinder track.
Once again the chiffchaff was in the same area again in the hedgerows near the Wildfowers' Pools gate. Nearby, a single redwing was with a small group of blackbirds and a couple of song thrush.
There were still c200 pinkfeet present in Frog Pond field.
A further 5 goldeneye were at Freeman's Pools along with 3 little grebe, another dozen or so coot, 18 teal and a handful of wigeon.

What the early part of 2016 will bring will largely depend on what happens weather-wise. I'm guessing we won't see much in the way of massive change, but it would be nice to get some colder, northern air in along with some of those classic winter birds. It still seems very much like autumn to me...
In the meantime, I'd like to wish all readers a very pleasant New Year and an enjoyable (flood-free) 12 months ahead.

This morning there were 8 adult whooper swans on Aldcliffe Marsh, along with several mute swans. These are the first that I have seen locally this autumn/winter. They seemed quite nervous and became agitated when a couple walked along with a dog. The then flew toward the river's edge and alighted, so they may well stick around for a while if they don't get too disturbed.

Nearby, a nice mixed flock of passerines included 9 tree sparrow and 7 reed bunting along with the commoner finch species. They were feeding in the stubble fields and flying up periodically into the hedgerow along Dawson's Bank.

There was no sign of yesterday's barnacle goose or the 80-plus pink-footed geese that had dropped in to join the greylags. In fact there were very few greylags to be seen; a hundred or so Canada geese were out on the marsh.

I've been spending a bit of time reading the collars on some of these greylag in recent days and am waiting to hear back about their origins. I suspect that, like most of the collared greylags that visit Aldcliffe, they're from the Lake District feral populations. But, as orange collars are apparently used on this species throughout the UK (and there were certainly some that I hadn't read here before) it might just be that we have one or two from a little further afield... 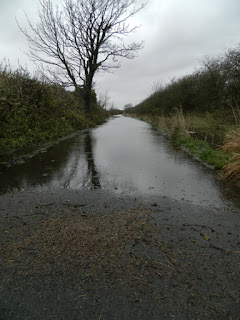 Despite my optimism I was unable to find any interesting storm blown birds earlier in the week, but I didn't half give it a good go in some very testing conditions!
As anyone who has visited the area in recent weeks will know, a significant (and increasing) stretch of the cycle track is completely submerged between the parking area at Aldcliffe Hall Lane and the Wildfowlers' Pools. It's pretty deep in parts and can just about be managed by bike but you'll definitely get very wet feet.
The fields around the Wildfowlers' Pools are really sodden and have been attracting good numbers of teal and redshank as well as one or two goldeneye.

Other recent highlights from the patch have included and adult Mediterranean gull on the Lune at Marsh Point yesterday morning, a pair of grey partridge near Walled Meadow, a couple of stock doves and while I was out looking for owls on Monday (the one calm evening we seem to have had in some time!) I noticed two woodcock flying out from Freeman's Wood to feed in the fields.