More Migrants on the Move

With no further sightings of Saturday's RB shrike and the notable change in weather (from positively Mediterranean to classic Northern European) one would expect things to have quietened down on the patch in recent days.
However, a couple of very welcome late migrants were added to the Aldcliffe yearlist with an active female redstart by Freeman's Pools yesterday (Monday) and a couple of whinchats there this morning.

I had gone out this morning with the express intention of finding a whinchat, so I was pleased when I finally clapped eyes on them in an area where they often turn up.
That's the thing about local patch birding; over the years one builds up a picture of a site and often the same areas attract the same species when passing through. By checking certain favoured spots at certain times of year, one increases the chances of finding specific birds.
When I first noticed this morning's whinchats they were feeding in much the same area but one of the birds seemed to take offence to the other and chased it off.

Other birds of note included a pair of great crested grebes on the pools - prospective breeders?

One of the concerns of local patch birding is how to treat news if one finds a rare bird? Can we manage parking and access, how far might people wish to travel in order to see a scarce visitor and how many birdwatchers might descend on this relatively quiet spot?

Of course, in lockdown these questions are to some extent moot - we would not wish to encourage anyone to get in a car in order to twitch a regional or national rarity. So while the small band of Aldcliffe patch birders have continued to search for noteworthy birds we have been, uncharacteristically, hoping not to discover anything that might draw the crowds.

However, when news broke on Saturday afternoon that a male red-backed shrike had been discovered along the Dawson Bank hedgerow, a small gaggle of West Lancaster birders suddenly found the need to take their daily exercise (as per government guidelines, after all).

Personally, I've spent time on the patch pretty much every day since I was furloughed but I'd given Saturday a miss due to the glorious weather and the likely hordes of walkers, cyclists etc, as a result of the lack of coherent messaging about staying at home... I believe the phrase may be Sod's law!

News reached the grapevine just before 4pm (huge thanks to finder Joe Murphy) and despite my immediate reservations about dropping everything (decorating, as it happens) I soon found myself leaping on my bike and heading towards the patch, which is literally just minutes from home. Despite the bird having disappeared from view, and news of its last whereabouts being vague, less than half an hour after deciding to leave the house I was stood watching this most dazzling of continental overshoots. Within an hour of news breaking, most of the local patchers were on site enjoying good views of the bird.

Red-backed shrike is a long-overdue first the Aldcliffe area and it represents the third species of shrike to be seen here to my knowledge.
A great grey shrike spent some time in Freeman's Wood back in December 1991 and a stunning woodchat shrike was in almost the same area as the red-backed (and remarkably close in date) on 8/9 May 2014. So, which next: Lesser grey? Steppe grey? Brown? Masked? Watch this space!

As April gave way to May the optimistic amongst us were out in search of more incoming migrants and while there were few surprises, we did at least see the continued arrival of commoner species.


A short trek anywhere along the cycle path between Freeman's Wood and Stodday is sure to be accompanied by a soundtrack provided by multiple warblers. Blackcaps, chiffchaffs, whitethroats, lesser whitethroats and sedge and willow warblers can all be heard with ease, blasting out their territorial rights. Reed warblers too are back in their usual nesting sites. Overhead swallows, house martins and swifts regularly sweep through while on the saltmarsh a few late wheatears, probably bound for Greenland, can still be found.
The majority of lingering white wagtails moved on last week with just a handful remaining into May.

On the ponds, as the water levels continue to drop due to the mostly rain free conditions of late, the number of birds has similarly dropped. The local breeding species remain alongside a few non-breeders. At least a dozen gadwall are hanging around along with a pair of teal. A lone drake wigeon looks set to spend the summer with us.
This morning (Friday 8) a single pink-footed goose was at the Wildfowlers' Pools - a couple of days ago Dan came across an unseasonal (and doubtless un-wild) barnacle goose. I failed to catch up with this May mega and had to do with the sight of a rather attractive, if incongruous, black swan on the Lune this morning in order to fill my quota of well-dodgy-wildfowl.
Talking of pointless web-footed birds, the first Canada goose goslings emerged this week while multiple mallard broods of various sizes can be spotted by anyone bored enough to look.
A Freeman's Pools the garrullous black-headed gull colony continues to grow - it will interesting to see how many young they get off this year.

The doomed lapwings in the fields have continued to get repeatedly clobbered by the need to grow maize for indoor cattle. There have now been three separate assaults on these fields ensuring that any second or even third nesting attempts have been rendered pointless. The handful of birds sat in the fields now may yet have a further visit by large agricultural plant to contend with. Let's the solitary nesting lapwing by the pools has some success.

On a less depressing note, other notable birds to have been seen around the Aldcliffe patch in recent days include: whimbrel, common sandpiper, common tern, eider and osprey.

With the forecast set to change significantly it will interesting to see how this affects the local birds and other wildlife in the coming days...

After the relative thrills of having a spring wood sandpiper on the local patch, Dan got wood for a second time in two days when he found a singing wood warbler near the FAUNA nature reserve on Sunday morning.

Yet another rapidly declining species nationally, wood warblers are not easy to find anywhere in North Lancashire these days and they are extremely scarce off-passage migrants. Only a handful have been recorded on the Aldcliffe patch by local birders in recent years with the last at Stodday on 25 April 2016 (almost four years to the day; also found by Dan). Prior to that, the last sighting I'm aware of was in early May 2011. So with that context, it is quite easy to see why Dan's Sunday discovery was exceedingly notable!

I was unable to get out yesterday but thankfully (if somewhat surprisingly) the warbler stayed around overnight and was still in the area this morning. Dan heard it in Admiralty Wood early on and I caught up with it along the tree-lined Aldcliffe Hall Drive where it was singing intermittently and eventually showed well.

On the subject of warblers, Dan's persistence and dedication paid off once more when he located a Cetti's warbler between Lunecliffe Road and the canal. Again, this is an uncommon species locally but unlike wood warbler, this colonising warbler is increasing across the UK. Once regarded as a major rarity confined to the south coast this skulking but vociferous bird can be found at nearby hotspots such as RSPB Leighton Moss at Silverdale and Middleton NR near Heysham.
With just one previous record on the patch (October 2015) Cetti's is long-overdue as a breeding bird on this side of the Lune. Let's hope that this signifies the arrival of the species as a regular bird to the patch!

Wood In The Hood

A great find by Dan on the Wildfowlers' Pools this morning - a dazzling, spangled wood sandpiper.

Although just about annual on the Aldcliffe patch, these scarce waders are more likely to be found in late summer when failed / post-breeding or juvenile birds are heading south. Spring records are far less common and it's great to see such a pristine adult wood sand on the pools!

Nearby a small flock of 7 swifts were feeding high over the quay. 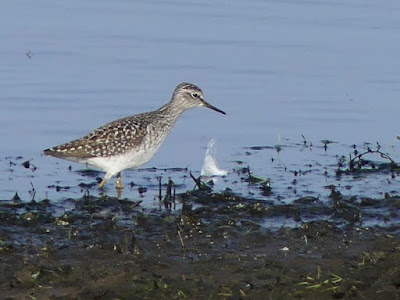 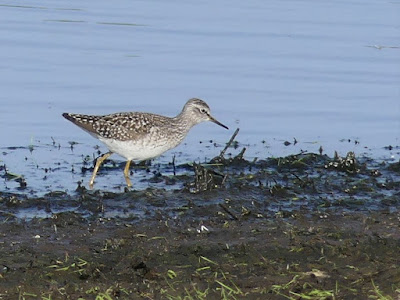