Highlights from a 3+ hour trawl around the Aldcliffe patch on Friday included the still present Siberian chiffchaff showing superbly again near the Wildfowlers' Pools.

As the water levels continue to drop many of the fields are starting to revert to something close to normal.
Of course the Flood is still flooded, but then it often is (hence its name). And the Wildfowlers' Pools looks absolutely fantastic as newly emerging boggy islands and large areas of shallow water are attracting masses of waders.
A feeding flock of 136 black-tailed godwit were frantically feeding alongside the more regular redshank.

Among these birds was a lone knot - quite a scarcity in these parts. That said, you don't have to go very far to see tens of thousands of these easily overlooked shorebirds but they rarely stray so far up the estuary to Aldcliffe.
In other interesting wader news, a greenshank was on one of the saltmarsh pools.
Scanning the far side of the Lune at high tide, I could see 4 pintail (2 males, 2 females), another bird that doesn't occur on the patch too regularly.

Among the 1200 or so pink-footed geese grazing on Heaton Marsh I could see a distinctive leucistic goose (pictured). Birds similar to this (or indeed the very same goose) were seen at Aldcliffe in mid-Feb 2012 and early March 2013. A rather striking orange-legged pinkfoot was also present.

Jenny and I took a stroll out again today (Sunday), taking in part of the patch. Three visiting birders were looking for the chiffchaff but hadn't seen it. I had a quick look but there was no sign of it while I was there.
However, I did spot a neat water rail rummaging around in the vegetation at the fringes of the still flooded cycle track.

The Wildfowlers' Pools continues to host tons of birds and a quick count revealed at least 270 black-tailed godwit plus the lone knot. These fields really do look amazing. Well, I'm sure the landowners aren't quite so impressed but from a birder's perspective it's something else!

Sorting the Chiff from the Chaff

I really have spent too much time trying to relocate the Freeman's Wood firecrest.
I've blamed everything from wind and rain for the lack of an appearance and now I can add perfect calm, bright conditions to the list of reasons for a no-show...
Whether it's still actually there I haven't a clue, but in the several hours I've spent attempting to re-find it I have at least become more familiar with many of the wood's other residents. Bullfinches are easy; treecreeper and great-spotted woodpecker a doddle; goldcrest and jay, not a problem. Today I even spooked a couple of woodcock as I crept around in search of the cryptic 'crest. (Freeman's frequenter Bill Myall mentioned that he too had flushed a couple of woodcock there a week or so ago).

Anyhoo, the day was glorious and I spent a good three and half hours rooting around the Aldcliffe patch.
Freeman's Pools held the usual mix of tufted duck, goldeneye, wigeon, little grebe, coot, etc. The only notable change here being the deliberate removal of some fencing to allow the horse of dubious ownership into the reserve to graze. It would seem that some people just do exactly as they please.
As I walked along the cycle track the liquid calls of northbound skylarks became evident. A group of five flew by while a few minutes later a flock of twelve passed over.

With water levels at the flooded Wildfowlers' Pools dropping daily the birds using the area is changing frequently. Last week this site and nearby fields was full of waders. A feeding flock of some 140 dunlin, 200+ redshank and 60+ curlew were all head-down enjoying the delights of mud-dwelling invertebrates. Today, just a handful of redshank, oystercatcher and lapwing were present along with the usual gadwall, coot, mallard, teal and goldeneye.

Good news came in the shape of a lovely little warbler; the Siberian chiffchaff put on a great show in the glorious sunshine and I couldn't resist getting another couple of snaps of this subtle beauty.
I headed on to Stodday ETW seeing little of note en route. The expected estuary birds were all seen, many gathering on the far bank as the tide peaked. A flock of 120 or so golden plover came in to roost with the more numerous lapwings.

I couldn't find any chiffchaffs of any description at the sewage works, though a dazzling pair of siskin were busy bathing and preening near the works entrance (photo). A single grey wagtail flew over calling.
The walk back to Freeman's Pools was fairly uneventful. I flushed a pair of grey partridge from the tideline, a group of five lesser redpoll were in the small tress along Dawson's Bank and several hundred pink-footed geese were on the other side of the river.

I had another go at hunt-the-firecrest on my way home but unsurprisingly that ended in failure.

After a couple of recent visits with little to report, yesterday I spent a couple of hours scratching around the Aldcliffe patch in search of something worth blogging about.

Birding's a funny old game. Relatively common birds in an unusual location can make one's day and even a slight increase in the number of regular birds can prove quite exciting. And so it was that I counted a mighty 24 gadwall on the flooded Wildfowlers' Pools. An increase of 5 birds!
Conversely at Freeman's Pools the number of tufted duck had gone down by 50% while wigeon had increased to an impressive 62 birds. Teal were thinner on the ground that of late and the coot at the Wildfowlers' Pools had peaked at a laudable 53.

A dapper kingfisher on the upper pools at Freeman's was a pleasant sight as always, and it was good to see a pair of roe deer in the reserve after quite a spell with no sign (or reports from the regular dog-walkers).
I failed to relocate that bloody firecrest again, and I couldn't even find any chiffchaffs along the cycle tracks despite the calm conditions.

Spring certainly seemed to be in the air and a couple of chaffinches were tuning up with the occasional burst of song, along with the odd song thrush (though they've been at it for a while).
It's hard to believe that in a few short weeks we will be welcoming the return of our first long-distant migrants - chiffchaffs, little-ringed plovers, wheatears & sand martins will doubtless lead the charge. The first avocets have already been seen at the Allen Pools at Leighton Moss RSPB reserve.

The post-flood fields to the east of the upper cinder track was still attracting feeding waders and there were 60+ curlew along with 80-odd redshank picking around the muddy patches.

Highlights from the walk along Dawson's Bank back down to Marsh Point included a small finch flock which I rather hoped were twite.
As I got closer I could see along with a couple of goldfinches and a linnet or two the majority were actually lesser redpoll - around a dozen or so.
Unfortunately they were a bit flighty and didn't allow for particularly good views. Or, as you can see, photographs...

Kingfisher fans might also be interested to hear that I saw a fine one on the canal just by Penny Street Bridge, near White Cross, this morning. It sat perfectly still just a few metres away.
Of course I didn't have a camera with me...

No Crest For The Wicked

I've spent a few hours around the Aldcliffe patch both this morning and on Sunday. To be honest, there's very little in the way of variation, thanks mainly to the weather; wet, windy stuff from the west isn't going to stir things up too much. The hope however, is that an interesting gull or something might drop by...
A good spell was spent trying to relocate the firecrest in Freeman's Wood on both days, but the wee dazzler was nowhere to be seen. I'm sure it's still in there somewhere. Nice to see so many bullfinches there though.
Freeman's Pools continue to host up to 24 tufted duck, 28 wigeon & 9 goldeneye, among other things. The goldeneye have been getting rather frisky, with lots of courtship display on show.
A further 6 goldeneye were at the still massively flooded Wildfowlers' Pools, along with 19 gadwall and 32 coot.
The Siberian chiffchaff was again in its usual spot; a grey wagtail was there too.
A few hundred pink-footed geese were on the marsh, though they were being bounced about a bit today by shooting activity on the other side of the river. 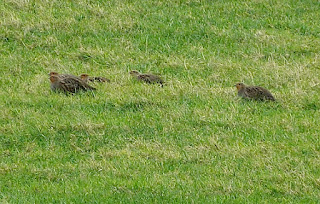 A covey of 5 partridge was in the fields just south of Aldcliffe Hall Lane (pictured).

Late afternoon, I headed to the FAUNA reserve to see if the barn owl was going to take advantage of the calm, dry conditions. I arrived to find it sat in the small ash tree close the the Millennium Orchard. It soon started cruising around the reserve and gave great views, frequently perching between bouts of hunting. Fab.