In off the red

2 red legged partridges and 2 grey partridges were within 50 meters of each other today at Snuff Mill Lane, in the south east of the patch.
at 15:25 No comments:

09.00 - 11.00am
Highlight for me today were seven Little –ringed Plover on the flood, and a few Meadow Pipits and Pied Wags. The Wildfowlers’ Pool saw a Green Sandpiper, Redshank, teal and a few Lapwing. 5 Little Egrets were seen on the patch. A dog walker and 2 spaniels have taken to walking over the marsh in a morning, so not much on there while he’s about! Chiffchaffs, Greenfinch, Chaffinch, Goldfinch, Robin, Dunnock, Song Thrush, Blackbird and Great/Blue/Long-tailed Tits all present etc. Kestrel near Freeman’s Pool, and a Peregrine on the pylons, Skylark, and Raven.
Steve.
at 11:54 No comments:

I had some weird dreams last night which involved rose coloured starlings, great grey shrike and redstarts so I decided to head down to the patch with my gal to see if any rarities were around. The pick of the bunch was the smew, which was on Freemans Pools with a green sandpiper. 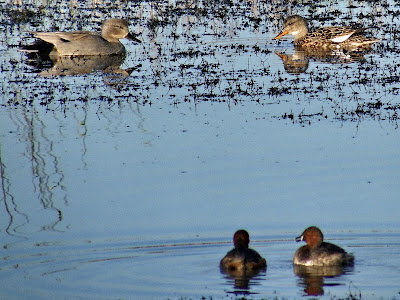 10.00am-12.00am
Clear sky today, apart from aeroplane pollution. Freeman’s Pool was quieter, highlight 2 Little Grebe and a few Teal, Mallard and only 4 Coot. Dater Pool also had 2 Little Grebe. Chiffchaff heard in wood, and approx 7 through to sewage works entrance. On Wildfowlers’ Pool was 1 Green Sandpiper, a handful of Redshank and Teal. The Flood was busy with up to 25 Meadow Pipits, 2 Reed Bunting and 2 Pied Wagtails. A Black-tailed Godwit was on the river looking very smart in summer plumage. A local Buzzard was on fence post and two more quite high circling headed over towards Morecambe bay. Raven, Crow and Jackdaw present, as well as plenty of Woodpigeon.
Steve
at 15:45 No comments:

Noon.
The female Smew was on one of the smaller pools today along with a Little Egret, on Freeman’s large pool were Tufted Duck, Shelduck, Goldeneye, Gadwall, Teal, Mallard, Coot, Moorhen, Oystercatcher, Lapwing and BH Gulls. Chiffchaff in woods, at least two heard. Greenfinch, Chaffinch, Goldfinch along track. Wildfowlers’ Pool saw Green Sandpiper 2, Redshank and Teal. The Flood had 2 LRP, Reed Buntings 6, Meadow Pipits and approx 12 Pied Wagtail. A Buzzard was causing quite a stir. Was hoping for a Wheatear but got a puncture instead, so a long walk back, went up through the village and saw 2 Nuthatch.
Steve.
at 15:54 2 comments:

Little Ringed Plover on the flood again, it was reported on LDBWS yesterday, along with Reed Buntings, Pied Wagtail 5, and Meadow Pipits and four Teal. Chiffchaff heard in Freeman’s Wood, on the pool much the same minus Smew, with 5 Shelduck. On the track a Chiffchaff, and also one observed at the cutting, Goldcrest also. The Whooper Swan showing well on Aldcliffe Marsh and 3 Little Egrets. A Buzzard flew over, kestrel and Peregrine near the pylons and Ravens. There were plenty of Woodpigeons around throughout the Parish. Small Tortoiseshell at picnic site.
Steve
at 14:33 No comments:

Dan here.
Came down to the patch looking for an early wheatear or an advance party of sand martins, and failed on both counts, but an above-average couple of hours was had nonetheless, some of it in the sparkling company of Steve W. 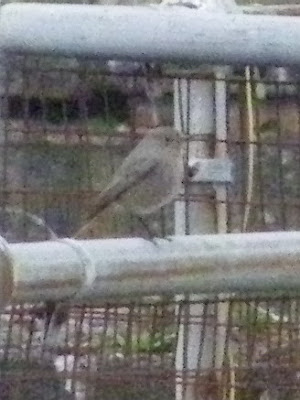 Having finally lost its black cherry just last November, Aldcliffe and district produced a second black redstart today, with another female-type flitting around Stodday sewage works.
Typical weather conditions for finding BR today-- grey, misty and drizzly.
It pays to carry a camera at all times....until you see the results... the above shot is the best I could manage. (The bird is the grey smudge perching on the paler pixels).
Other passage migrants noted included a group of 7 goldcrests by the picnic area, and a further three dotted elsewhere. This is a respectable Spring tally for this species and is synchronous with good numbers recorded at Heysham.
Two green sandpipers were the margins of the Wildfowler's Pools today after a shaky start to the year for this near-emblematic Aldcliffe regular.
The touring redhead smew was again at Freeman's Pools, loosely associating with three goldeneyes, eight tufted ducks, six gadwalls and ten wigeon. The lone whooper swan is still present at the North end of Aldcliffe Marsh.
Larger gulls are quite a feature on the estuary in recent days, with dozens of pristine breeding plumage lesser-black backed and herring gulls making the place look nice.
Most of these will be off-passage, but I suspect this Mediterranean gull on the river just off the quay this morning is the one that winters in the vicinity of Ryelands Park.
DH. 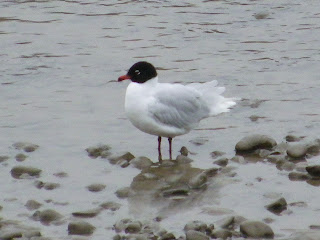 Steve here, just to mention the Flood saw 19 Pied Wag and a handfull of Meadow Pipits.
at 17:46 No comments:

Ad Cygnus In Good Health, or The (re)Turn Of The Smew

Dan here﻿ with a quick round-up of what's been a good birding weekend on the estuary... 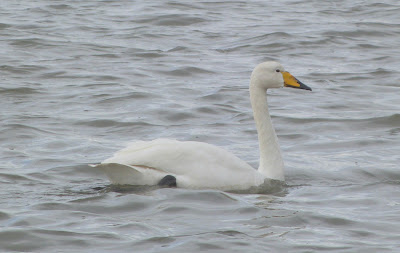 This handsome adult whooper swan was present both days, mingling with mutes and pictured here (by Rosie Briggs) enjoying the tidal inundation of Aldcliffe Marsh.
Following on from my two last week, Pete Crooks found a tundra bean goose with a smallish flock of pink-footed geese this morning.
Much larger numbers of its host species were in evidence yesterday, with at least 1890, including one bearing the collar 'THF'.
Highlight of Saturday's guided walk (sixty species logged) was perhaps the prolonged but distant viewing of a short-eared owl as it jinked over Colloway Marsh and fields NE of Overton.
While some estuary sites in the North West have SEOs galore, there are only something like one or two records per year here.
The peripatetic redhead smew was on Freeman's Pools this afternoon, having been clocked on the Lune near Conder Green by a WeBs counting Steve W. a few hours earlier .
A few indicators of passerine migration this weekend with small numbers of meadow pipits, skylarks and siskins heard moving overhead and an off-passage flock of 26 pied wagtails.
The first volleys of sand martin through the parish can only be days away.
DH.
at 16:29 No comments: 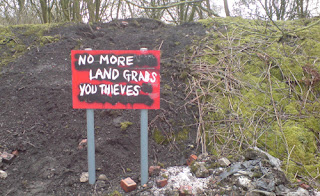 Freeman’s Pool had Tufted Duck 6, Goldeneye 6, and Coot, Mallard, BH Gulls, Oystercatcher. On the track was a Kestrel, the chopped maize fields were busy with Lapwing and by the midden pile Reed Bunting and Chaffinch. Further down were half a dozen or so Greenfinch. Wildfowlers’ Pool saw Teal, Redshank, Lapwing, Mallard. Frog Pong Little Egret and a few Wigeon. Darter Pool Gadwall 2.
The Flood had 5 Pied Wagtail and 2 Meadow Pipits. Overhead Skylarks and Linnets. Two Bullfinch were at the cutting and Grey Wagtails towards the sewage works. Ravens at the pylons.
Steve 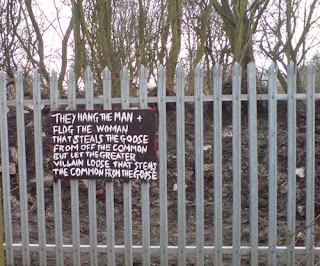 It's arguable as to whether Heaton Marsh (on the western edge of the estuary) is Aldcliffe proper.

But owing to the fact that I found two tundra bean geese grazing away at it this afternoon.... it is today.

Didn't pick out the two adults until about the tenth scan of the 700 or so pink-footed geese. Nine white-fronted geese were far more conspicuous. But after a while, the beans gave themselves up and gave great views.

Pete Marsh came down from his base on the other end of the bypass and got an eyeful too.

My camera skills are as bad as ever, and this greyish eyesore is the proof. I think that's a goose... 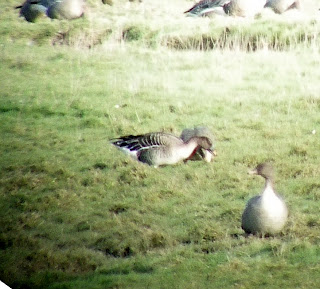