Freeman's Pools were quite busy, the highlight being a Green Sandpiper. Also present were Tufted Ducks, Goldeneye, Gadwall, Teal, Grey Heron, Oystercatcher, Mallard, Coot, Moorhen, Mute Swan and a dozen Woodpigeon in the trees. Heading south the track was quiet bird wise; I was annoyed to see so many dead frogs! A Raven was hanging about for a while doing a few twists and turns.
On the marsh were approx 1100 Pink-footed geese, spread as far as Cadaver Corner along with a few Oystercatchers and Curlew. I was pleased to see 3 Meadow Pipits and 2 Mistle Thrush in the stable fields. A Little Egret was feeding by the pylons.
Steve
at 18:28 2 comments:

Nothing to do with birds, not in the UK anyway! I am attempting to climb Kilimanjaro this year, September, and raising money for Marie Curie Cancer Care. Thought you might like to have a look at my Justgiving Page/Blog here.......

It was a really big tide today which meant plenty of action. A good few thousand Lapwing kept taking to the skies as the tide pushed them off the mud, then the marsh and finally into the fields along with other waders. Even the Flood had some birds residing Redshank 25, Curlew 46, BH Gull 40, Starling 75. I was looking forward to reaching the Wildfowlers’ Pool. But disappointed as 2 dog walkers decided it would be fun for their spaniels to go mad in the water, it is beyond me, when there are miles of public footpaths why some irresponsible people still go wherever they want!
Freeman’s Pool was busy; a Little Egret was feeding in one of the smaller pools, lapwing 175 on the island. Coot, Goldeneye, Gadwall, Mallard, Wigeon, Grey Heron all present.
With the mega tide I was right to think that Rock Pipits would be a good tick, there was half a dozen, possibly more, near the pylons, along with Wrens and Pied Wagtails on the detritus. A flock of 19 Skylark flew over. On the way back I was pleased to see a Stonechat on Chat Wall. Also, on the track was plenty of singing Chaffinch. Half a dozen Pheasants in the fields and I also saw 2 Grey Partridge.
Steve
at 18:05 No comments:

One of the signs of spring on the patch are the returning oystercatchers and Fridays' walk round revealed two pairs, one pair at Freemans pools and one pair at Frog pond. The Freemans pool couple are usually successful and have raised two chicks in each of the last two years. I am not sure about the success rate of the Frog pool pair. These have a lot to contend with the grass being cut early in the year for sileage. I have noticed oystercatcher pairs at Frog pond since 2003 when I started to visit Aldcliffe. I wonder if it has been the same pair every year?
Guy
at 17:31 No comments:

Bitterly cold wind today, didn't hang about long! Started at Freeman's Pool and similar to last week's birds, Goldeneye, Shoveler, Gadwall, Coot, Teal, Oystercatcher, Mute Swan, Heron, Tufted Duck and 120 Lapwing on the island. Wildfowlers’ Pool high water levels and not much present, a Little Egret was near the pond. On the track were a couple of singing Chaffinch and flock of Goldfinch.


On Aldcliffe marsh were approx 850 Lapwing. The flood was void of birds. 175 BH Gulls in the fields.
Steve

and news from Sunday...

a green sandpiper was on Freemans pool during my weekly pre-sunset  dog walking visit.

Wednesday 16th Feb...
Nothing to add really, all seemed fairly quiet, a few Chaffinch and Dunnock singing. A Peregrine, possibly 2, in the pylon. Little Egret on the marsh, 2000 Lapwing and 40 Curlew.
Steve

First time down the old patch for a while, family commitments meant birding was off the agenda. So today was brilliant getting into some Aldcliffe “normality”! I began at Freeman's Pools; a Kestrel flew over the heading towards the old tip. The pools were busy 23 Wigeon, 10 Tufted Duck, 2 Oystercatcher, 17 Goldeneye, 2 Mute Swan, 25 BH Gull, 6 Coot, 4 Gadwall, 2 Shoveler, 7 Teal and 2 Grey Heron. Pair of Mistle Thrush was in the woods opposite and 26 Fieldfare flew over heading south.
At Marsh Point were 24 Oystercatcher, 35 Lapwing, 9 Herring Gull, 25 Common Gull and 90 BH Gull. The marsh was fairly quiet with 24 Mute Swan and about 20 Canada Geese. I cycled down to the railway cutting and was struck by the amount of birds on the river banking, mud and marsh. Approx 2500 Lapwing, 111 Golden Plover, 93 Dunlin, 66 Redshank 38 Curlew, 25 Shelduck, 9 LBB Gull, 450 BH Gull and as I was counting the Dunlin chaos ensued as a Peregrine bombed in and flushed most of the birds, I then saw all the Starling, at least 900 split off into three flocks.
I continued towards the pylons, another Kestrel was near the farm, and heard another singing Chaffinch, a Bullfinch was also heard along with Goldfinch. At the picnic site another peregrine flew over flushing yet more Lapwings by the sewage outlet. I then saw a Stonechat on the fence posts which was a great bonus. 2 Little Egrets were on the marshy bit, and a further bird on the far side of the river.
I cycled past the sewage works and could hear a peregrine screeching from the pylon, I reckon they will breed this year, hope so. I made my way back along the road, at Aldcliffe village there was a flock of 40 Redwing in the trees, also of note was a pair of Nuthatch. Great couple of hours. 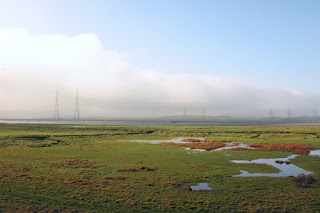