Glad I went out today, because I finally found a great egret*, a bird which has been on my Aldcliffe wishlist for years.

It was feeding beneath the pylons which cross where Heaton marsh and Colloway marsh meet, in the company of ten little egrets and four grey herons.

A shocking dodgyscoped shot of this new patch tick: 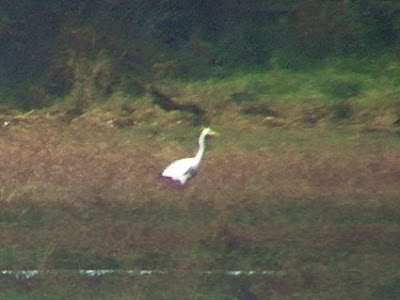 The high tide revealed around 20 rock pipits and a few skylarks that would otherwise be lurking in the marshes, unseen.

Around 8 goldcrests and a single siskin were to be found in the copses and hedgerows, aswell as a lonely redwing and small parties of fieldfares and blackbirds.

* these large, scarce egrets are more often referred to as great white egrets, but this name gets my tautology goat. Until Britain gets colonised by dark-morph western reef herons, I've no need for the 'white'.

Despite my attempts at bush searching I didn’t see one warbler or owt. The high tide pushed many birds on land, hundreds of Lapwing, Golden plover, Curlew, Redshank. Dunlin and a flock of 10 Snipe in the fields. Little Egret visiting the Wildfowlers’, Freeman’s saw the usual Grey Heron, Gadwall, Tufted, Little Grebe, Coot and Moorhen, Kestrel in dead tree. A Buzzard, on the hillside. Great spotted woodpecker at the cutting, Reed Buntings near the maize. Plenty of Chaffinches about, a Bullfinch on the track. An influx of Mistle Thrush with 7 seen, Song Thrushes, along with a few flocks of Fieldfare and two large flocks of Starling. A Rock Pipit near seweage works.
Steve
at 15:57 No comments:

A peek out of the window this morning suggested that a day of bush-bashing might be worth a try.

Indeed, the completely still, misty and drizzly conditions felt pretty good for searching for a posh passerine, but in the end, it wasn't to be.

Quite a few off-passage songbirds were around early on, with around  50 fieldfares, 30 redwings, 60 (mainly 1st-Winter) blackbirds, 20 song thrushes and a few mistle restless in the copses and hedgerows, and an increase on recent robin numbers.

Two lesser redpolls and small parties of redwings and blackbirds were to seen to spill skywards from Freeman's Wood, which had around 10 goldcrests later in the day.

A blackcap, a chiffchaff and 2 goldcrests were at Stodday.

The visibility soon improved, with sunny spells and freshening winds. From ten till two a steady but light passage of Skylarks occurred, with an estimated 30 per hour overhead, Southeast.

355 pink-footed geese in five skeins also pushed through SouthWest in this period.

A shoveler was on the Wildfowlers Pools and eleven gadwalls and five wigeon were on Freeman's Pools.

Four migrant hawkers and two common darter dragonflies were out in sheltered spots. 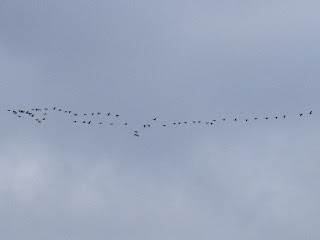 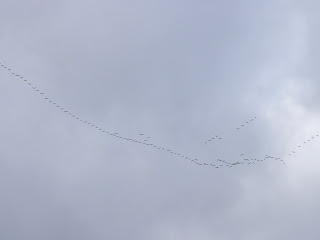 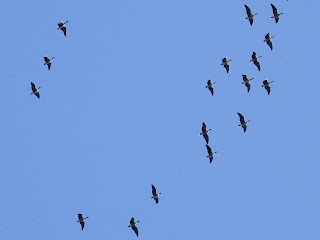 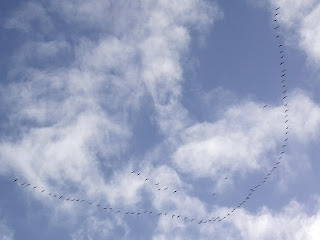 Crossbill Traffic (so hard to get through to you)

A bit of visible migration this morning (0830-1230), but lower figures than might have been expected, especially with big numbers of winter thrushes moving a few miles either side of the patch.

Fieldfares were in shorter supply than yesterday and chaffinches, also a key feature of local vis-mig logs, were barely into double figures.

I didn't scribble much down on account of the strange paucity of vis, with only skylark, meadow pipit, linnet, alba wagtails and c.50 redwings getting into mid-double figures.

All that being said, the morning was fun nonetheless, with a party of seven crossbills briefly circling the walled meadow as if to land, before gaining height and chip-chip-chipping off West.

This is a new species for my own Aldcliffe list, if my memory serves me well.. Mr. Carter-- have you recorded them here before?

Five chiffchaffs and 3 goldcrests were seen. A green sandpiper was at Freeman's Pools and a greenshank is still using Aldcliffe Marsh.

Given the forecast for a dry and calm morning I thought I'd get out early-ish to do a spot of vis mig. However it was almost eleven before I was out and communing with dots in the sky, but luckily there was some passerine passage until well into the afternoon.

Most were heading S.E. over my vantage on the saltmarsh edge.

The yellowhammer was particularly pleasing, since this species is very scarce in this part of Lancashire. The last one seen here was a long-stayer several Autumns ago.

The first redwings and fieldfares of the season are always lovely to see and hear too. After the vis session A further 120 of the latter species dropped into the hedgerows for a minute or two before heading off, West.

Decent numbers of long-tailed tits and smaller numbers of blue and coal tits were frantically hedge-hopping South. A single chiffchaff and two goldcrests were trying to keep up.

Five blue tits, obviously wanting to crank the pace yet more, parted with their long-tailed congeners by rising in small circles to about 20 metres, before flying West across the marsh and estuary.

Wader-wise 28 dunlins, 2 black-tailed godwits 2 snipes and 160 all-European golden plovers were the pick of the waders on the 'Aldcliffe' stretch of estuary, where a rock pipit was also in evidence.

A greenshank was on the marsh, as were up to nine little egrets. Eight tree sparrows were in the yet to be harvested maize, and six gadwalls were on Freeman's Pools. A minimum of five buzzards were noted.

Now enjoy some my cropped pics of speeding specks which highlight the magical views possible while out vis-migging:

Skein If You Wanna Go Faster

An early afternoon visit was quite wet to begin with, but as the cloud lifted a few birds moved through, namely 24 meadow pipits, six skylarks and three swallows (all South-East) and these Southbound skeins of pink-footed geese:


On the deck, a 7-8 goldcrests were dotted along the hedgerows, a greenshank was still haunting the marsh and a siskin was heard in Freeman's Wood. A grey partridge was heard and the whooper swan was grazing alongside cattle beneath the pylons.

An adult spotted redshank was in the Gull Bank area of the estuary this afternoon, near a brute of an adult Mediterranean gull while a lone adult whooper swan was quietly feeding on the marsh behind.

A greenshank was on Aldcliffe Marsh, while a single wheatear was just yards outside our recording area!

A gadwall was on Freeman's Pools and a common buzzard was noted overhead. 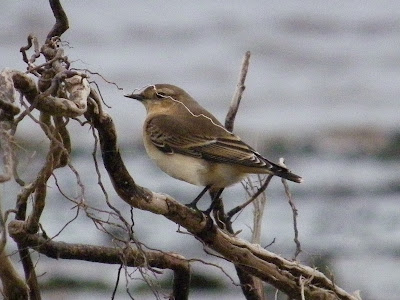 Around 500 golden plovers were on the patch today, so I thought I'd better get grilling given the superb run of yank wader finds in the NW that began one day after I quit these shores for a fortnight.

Two grey plovers were the best I could pick out. Three snipes, eight dunlin and a thousand lapwings were on our stretch of the estuary too.

Two lots of pink-footed geese moved through SW, with 62 (pictured) and a bird trying to form a skein of one an hour later.

A single green sandpiper was at one of the ponds and a skylark was heard.

Plenty of activity today with all the common birds. The hedge near the top of pools by the river saw flocks of Long-tailed, Blue and Great Tits, Dunnock, Goldfinch, Song Thrush, Blackbirds, Robins, and a single Swallow over the maize. On the pool were Little Grebe 6 and Coot. A Kestrel was doing the rounds. On the river were 15 Mute Swan. Wildfowlers’ saw 1 Green Sandpiper and a number of Teal. On the marsh was a single Wheatear, 1 Little Egret, roughly 1500 Lapwing, plenty of Curlew. Heard a few Skylarks above.
At the old cutting a flock of 35 Linnet were very active, along with Bullfinch, Greenfinch and Chaffinch. A Peregrine spooked all the waders and a Sparrowhawk then bombed through the cutting. A beautiful Hawthorn Shieldbug landing on my arm finished the morning off nicely.
Steve
at 13:53 No comments: