I was working at the Birdfair at Rutland Water over the weekend so when news broke that a lesser yellowlegs had been found at Conder on Sunday I wasn't in much of a position to do anything about it.
Of course it's only 3 years ago that Aldcliffe played host to this rare trans-Atlantic wader but nonetheless, yank shorebirds are always great to see so close to home turf.

Naturally, once back in Lancashire, I spent the first part of my birding day today checking the patch before continuing along the cycle track to 'mini-twitch' the vagrant tringa. Well, one has to have one's priorities in place.
Despite the active management work being undertaken by Lancashire Wildlife Trust staff at Freeman's Pools, there were still plenty of birds to see there.
The first autumn gadwall were back with two eclipse birds present and similarly five post-breeding wigeon were also on the main pool.
I counted 12 little grebe and 22 coot.
A single common sandpiper was on the Lune off Marsh Point.
Teal numbers continue to grow at the Wildfowlers' Pools. Last week around 70 were on the pools; today the numbers exceeded 120 birds.
A lone green sandpiper was feeding at the Flood but there was little else there.
Among the throng of common and black-headed gulls at Gull Bank I picked out 3 adult winter Mediterranean gulls while the large lapwing flock on the sandy shore included a couple of golden plover.
A female merlin gave great views as she spooked the waders before heading across to Heaton Marsh and a large juvenile peregrine added to the pandemonium by harassing the birds further upriver.
Masses of the usual gulls, common waders and little egrets were feeding along the estuary on the dropping tide but other than a greenshank and a further 5 golden plover there wasn't much to add.

When I arrived at Conder the yellowlegs was showing well but unfortunately the light was behind it. I tried to see if it was visible from the Conder Pool side but soon made my way back to the foot bridge and 'scoped it from the road there. I managed a couple of iffy record digi-shots, as you can see. A couple of ruff and up to 3 common sandpiper were also present.

Two decent dragons were on the patch on the 13th; the Ruddy Darter pictured below and a Common Hawker.

My first record of either here in 7 or 8 years. Ruddy Darter is in decline in Lancashire.

Other odonata sightings in recent visits have included some of the first Migrant Hawkers, ovipositing Common Darters and building numbers of Emerald damsels.

The bird scene has been less interesting, with two adult Meds and a Greenshank the best I could manage today.

Human disturbance to the estuary doesn't let up. Birds are forced onto the relative safety of the lip of Colloway Marsh...and then jet-skis move them on again. The conduct of a 'professional' dog-walker with eight off-lead canines on the marshes today was anything but. 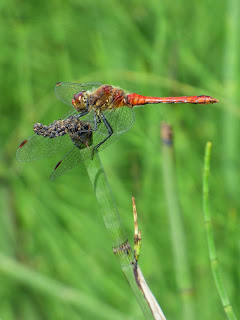 After having a good trundle around the regular Aldcliffe area this morning, I decided to stray off-patch for a bit and paid a visit to Conder.

Highlights from Aldcliffe included 6 green sandpiper on the Wildfowlers' Pool (5 seen on my way to Conder, 6 on my return). A single common sandpiper was also picking its way around the edges but there was no sign of the garganey, despite the presence of half a dozen teal.
The female tufted duck was again at Freeman's Pools. Little grebe and coot numbers have increased here in recent days, with up to 7 grebe and 14 coot on the main pool.
A couple of noisy peregrines were mucking about around the pylons, keeping the local lapwings on their toes.

So, having failed to find much of note along the upper Lune estuary (with the exception of loads of little egrets) I pedaled onward toward Glasson, hoping to see if the spoonbill was still hanging around the Conder estuary mouth.
It was.
And it was doing what spoonbills are so fond of doing.
Nowt.
It was characteristically stood with its ridiculous spatulate beak concealed beneath the folds in it wings, snoozing away out on the marsh. It did lift its head out at one point and even flew a short distance before assuming its statue-like stance once more.
As the tide dropped to reveal its food-filled mud, I had a quick look around the Conder. Along with the many redshank and lapwing were smaller numbers of black-tailed godwit, curlew, dunlin and common sandpiper plus a lone juvenile ruff (pictured) and a greenshank.
Jon

The drake garganey in eclipse plumage continues to remain faithful to the Aldcliffe patch, ensuring that even a brief bit of après-work birding offers something interesting.

Talking of work, it's all been about peregrines, ospreys and bee-eaters this week. Not that I'm complaining of course...
Talking of bee-eaters, it really is worth making a trip to see the nesting site in Cumbria. One of the nests, in full view of the RSPB watchpoint, is currently very active and visitors don't have to wait long before an adult bird comes swooping in with food for the growing chicks. For details of this amazing event click here.

Anyhoo, enough of Mediterranean exotica and back to Aldcliffe...
I nipped out this lovely, sunny evening and to my delight, I soon found the garganey. Today it was back at the Wildfowlers' Pools with 3 common teal. Nearby a green sandpiper was feeding on the pool edges before flying off toward the Flood.
When I arrived at the Flood, the green sandpiper was probing around in the mud, while a stock dove came down to drink.
Another green sandpiper was at Freeman's Pools but other than a single female tufted duck there was nothing new to see there.


Bestest bird this afternoon was an adult Curlew Sandpiper-- feeding along Gull Bank on the dropping spring tide. Ten or twelve pixels are devoted to it, below.

It was in the company of Lapwings, gulls and a very large pink jellyfish (c2ft across) which had washed up on the mud.

Other passage waders at Aldcliffe included at least two Whimbrel and a Green Sandpiper.

Passerine interest seemed very limited with just a few juvenile Chiffchaffs and a Sedge Warbler drawing any attention to themselves.

Jon's Garganey is still in the area, as are many (low four-figures?) feral greylags.

Odonata spotting was a bit hit and miss in borderline weather but a few Emerald Damselfly and Brown Hawker were new for the year. Readers of a sensitive disposition should avoid looking at the Emperors pictured below. 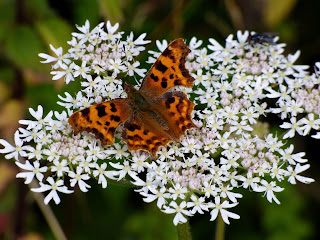 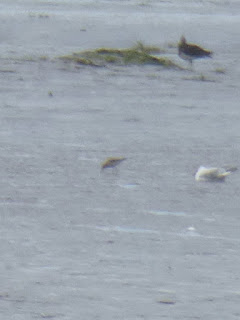 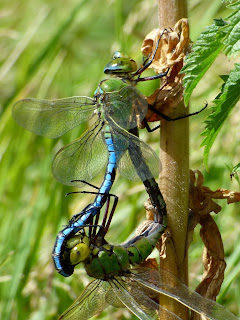 
Trevor Connah from the Morecambe Bay Wildfowling Association has contacted me to help spread news of some planned work strengthening the Aldcliffe Marsh sea wall AKA Dawson's Bank.

The work, requested by the farmers (in order to prevent tidal breaching) has been given the all-clear by Natural England and is to be carried out this month.

So we can expect tractors and other machinery, and a period of disturbance hopefully no longer than a couple of days.

News of specific dates as I get it. 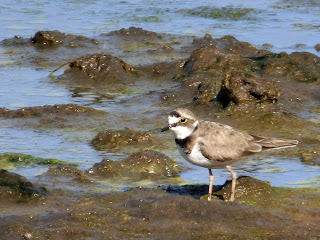