I hope that you have all had a jolly old Christmas and that you are all looking forward to a relatively stable 2017... interesting times lay ahead!

On a less contentious note; what's been happening in the Aldcliffe recording area? Well from what I can see, very little. My recent sorties have been fairly uneventful and despite the not-so-big-freeze yesterday there appears to have been little cold-weather movement of birds.
This morning, a dozen goldeneye on Freeman's Pools was the largest recent count of this handsome diving duck.
Generally, there don't seem to be too many around in the LDBWS region this winter and double figure counts are few and far between. Five tufted duck and a scattering of gadwall, wigeon, mallard, teal and coot continue to reside on the pools.
A pair of roe deer were present this morning - the first I've seen down there for some time.

After an absence of several days the greylags and Canada geese were back on the patch with a large gaggle grazing in the Frog Pond field.
When I was working at Leighton Moss on Tuesday a load of greylags were out on the marsh beyond the Eric Morecambe Pools and with them was a pair of white-fronted geese.
Naturally, I'd hoped that maybe these two 'proper' geese might travel with the greylags (if in fact they are the same flock) but there was no sign of them.
Along with the numerous ringed Canadas and collared greylags was a darvic-ringed greylag that I have never seen here before - it'll be interesting to see where that bird has come from!

Nearby three grey partridge (increasingly hard to find anywhere in North Lancs) were in the maize fields. I wonder how long it will be before we lose this species here altogether?

A kingfisher added a splash of colour at the otherwise quiet Wildfowlers' Pools yesterday and a pair were flying down the Lune at Marsh Point this morning.

There are still tons of blackbirds and a few song thrushes in the hawthorns along the cycle track but the bulk of fieldfare and redwing appear to have moved on.

I'll be working at Leighton Moss again tomorrow (NY Eve) so this will be my last post of the year.
Have an enjoyable and safe New Year and here's wishing for a bird-filled 2017!

It's been 10 days since my last day off so you can imagine my delight when I saw the forecast for this morning...
Undeterred, I headed out to for a quick check around the patch before Storm Barbara made her unwelcome appearance.
All was quiet.
Other than 5 tufted duck, a handful of coot and a teal Freeman's Pools was birdless.
Frog Pond was a little busier with c60 wigeon in situ plus another 'tuftie'.
Three smallish groups, totaling around 150, of pink-footed geese came down from the drumlins and landed in the fields to the east of the cycle track. Several people have mentioned that a few hundred pinkfeet have been in the area in recent days, with two pale-bellied brent geese among them on the 19th. It's always worth checking through geese at this time of year - who knows what might turn up among the commoner species!
I then had a look at the Wildfowlers' Pools and The Flood but they were also quiet.
Along the path good numbers of fieldfare and blackbird plus a few redwing were still taking advantage of the bounty of fruit on the many hawthorns.
It will be interesting to see if the storm brings any notable birds to the area in the next few days; I'll certainly be getting out to take a look!

Despite my being tied up with work, it hasn't been an entirely birdless few days.
Having traipsed off to the Greaves area of Lancaster to catch up with waxwings several days ago, I was delighted when they decided to come and see me a earlier this week.
On Monday morning Gav Thomas called me and said "Have you seen waxwings from the office yet?". I replied no, to which he answered "there's 30 in the trees here".
And so a gaggle of RSPB employees tumbled from Cameron House to gawp at the flock, watching in delight as the birds flew down to a berry-laden rowan by the White Cross pub.
And so they remained for the week, delighting (and bemusing) passers-by, local birders and RSPB staff as the flock fluctuated between 10 and up to 60.
We've been able to keep an eye on the birds from the office window ensuring that waxwing is well and truly on the office list!
Apparently the collective noun for waxwings can be either an 'ear-full' or a 'museum'. Personally, I find those both too ridiculous to bother with so I'll stick with flock for now...

The past few visits I've made to the Aldcliffe area have been fairly uneventful, to be honest. The mild weather seems to be keeping wildfowl numbers at a low while the lack of harsh conditions allows many smaller birds to go about their business with relative ease and be less inclined to flock in numbers.

Duck numbers are overall pretty unimpressive right now with just a couple of goldeneye, 4 or 5 tufted duck and 30-odd each of wigeon and teal kicking around the pools.
Even the semi-resident greylags seem to have pushed off to somewhere more exciting...

The one notable upward change has been the influx of thrushes, particularly fieldfare. So far this winter there have been very few fieldfare around the patch but in recent days there have been sizeable flocks feeding in the hawthorns along the cycle track.
Redwing too, while having been present in fairly decent numbers have also increased significantly, as have blackbirds. A handful of song and mistle thrushes have added to this thrush-fest.


Talking of thrushes, the big news in the last week or so has been the discovery of a dusky thrush in Derbyshire.

This very rare visitor to the UK breeds in central Siberia and ordinarily spends the winter in south-east Asia, primarily in China.
Naturally such a scarce bird attracts a great deal of attention from the country's birding community and hordes of listers have descended upon the quaint Peak District village of Beeley.
Local media have gone mad with scores of unimaginative sub-editors opting for that perennial favourite headline "Twitchers Flock To...". Sigh. 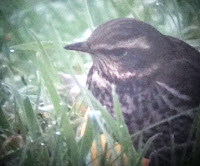 Anyhoo, here are a couple of rubbish shots I got yesterday by sticking my phone in front of my 'scope - the thrush was rather too close to get the whole bird in!
For further info about this fab bird and to see a frankly better photo click on this link from the BBC.