I chose to make my post-work visit to the patch a late one yesterday.  The main reason for this was that I hoped to see whether the barn owl that has been present throughout the winter was still in the Aldcliffe area. And of course May is a pretty good month for finding off-passage short-eared owls here too.
Due to the glorious sunshine, it remained light well past 9pm and I had a good couple of hours checking a few choice spots around the site.
As it happens I didn't see any owls but I did have two rather amazing experiences - one simply confirmed something that I had suspected for some time while the other was a complete and utter surprise.
The unexpected discovery involved hearing a bird, calling from across the fields around 8.45pm. I was stood on the cycle track having just checked Darter Pool when I heard a distinct but distant rasping call coming from toward Dawson's Bank. Now, I don't have the best hearing these days and so trying to figure exactly where it was coming from wasn't easy but I cupped my ears and heard what sounded exactly like a corncrake!
It went on for around half a minute allowing me to guess that it was likely coming from the hedgerow or the area of vegetation around Bank Pool. I racked my brain trying to figure out what else it could be. After all, I hadn't heard a corncrake for a few years and I didn't want to be too hasty in identifying it as such. It wasn't a grey partridge (they had been calling earlier in an adjacent field), and although I couldn't recall what red-legged partridge sounded like off the top of my head I was pretty sure they didn't have a two-part sawing-action rasp like that!
I tried to get a little closer to figure out just where the bird was and to hopefully get a recording of it, but over the next 20 minutes or so it never vocalised again.
When I got home later I checked out recordings of corncrake calls to see whether I was totally off the mark or not, but it just confirmed my thoughts. Oh, and for the record, red-leg partridge sounds absolutely nothing like that.
So in conclusion - a new bird for Aldcliffe but not under the most rewarding circumstances... it would of course have been fantastic to have seen it but like most birders, I heard more than a few before finally laying eyes on one even in that corncrake hotspot of the Outer Hebrides.

The other first of the evening concerned a mammal. As I was scanning over Freeman's Pools in the fading light (yes, still looking for barn owl) I noticed a splash, and as I got my bins on the rippled water I saw a thick tail disappearing beneath the surface. Otter!
Over the nest 15 minutes or so the otter surfaced several times, much to the annoyance of the local mallards and coot who kept a wary eye on it. I have long suspected that otters must visit this site from time to time and have seen signs to suggest as much. They have been seen in the nearby canal and at various spots along the Lune estuary, so it was quite a treat to see one so well on my local patch (and just a few minutes from home!).
As you can see I did manage a photo of sorts, but for all you know it could be discarded Carlsberg can or a dead moorhen...

Earlier today I had a quick trawl around the area but there wasn't too much going on apart from the thoroughly depressing sight of the maize fields being ploughed, putting a certain end to any lapwing broods that may have escaped last week's muck-spreading.
Heaven only knows if any pairs will get to raise any young this year, but there is at least still plenty of time for further attempts. 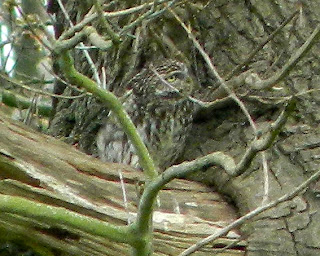 The only passage migrants concerned a whinchat and 3 large wheatears (no doubt Greenland-bound) plus a handful of swifts and a slow trickle of swallows.
Little ringed plover pairs were on Freeman's Pools and the Wildfowlers' Pools - the Flood having all but completely dried out, I couldn't see any there. A common sandpiper was also on Freeman's Pools.
The track hedgerows were alive with the songs of whitethroat, blackcap, chiffchaff and other common species. Lesser whitethroat seem a little on the scarce side still with just a couple heard.
A single whimbrel was near the Creek, a lone little egret was at Stodday and 5 eider were on the Lune.
Kestrel, sparrowhawk, common buzzard and peregrine were all seen and a little owl was trying its best to avoid detection at the Admiralty Wood (pictured).
Jon
at 15:54 3 comments:

A Linnet In The Dung Pile

Yesterday, it was glorious for much of the day and so after work I hoofed it down to Aldcliffe for a mooch around the patch.
Freeman's Pools were unusually quiet with just a few mallard, coot and moorhens present on the water. The mute swan pair have now constructed a formidable nest in the reeds, let's hope that they can raise a brood.
On the island, a surprise came in the form of 4 smart black-tailed godwit. Not exactly unusual in the Aldcliffe area, but they scarcely visit these pools.
A couple of singing sedge warblers were my first of the year, and one in particular showed brilliantly.
Along the cycle track I came across a neat male whinchat near Darter Pool and the linnet flock in the stubble fields had increased to a rather impressive 44 birds. I carefully scanned through just in case some odd interloper might have joined them... it hadn't.
On the Flood there were still 8 white wagtails, along with 2 pairs of little ringed plover.

With a day off scheduled for today, I was optimistic for a good early birdy start based on the forecast. Overnight southerly winds with drizzle in the morning - what could be better? Unfortunately our friends at the Met Office were a little off and the day started bright with the wind having switched to something more south-westerly and of course the lack of precipitation had me abandoning any ideas of hoopoes, woodchat shrikes and lesser short-toed larks.
As it happened I really struggled to find anything worthy of mention, and even the white wagtail convention at the Flood had completely cleared out.
At least 20 linnet were still kicking around, including a few rummaging around in the piles of horse manure currently occupying the stubble fields.
A lone wheatear and the on-territory common and lesser whitethroats did all they could to keep me interested but I didn't even pick up any notable vis; meanwhile stacks of redpoll and a trio of tree pipit graced nearby Heysham Obs airspace...  and let's not even mention Walney's bee-eater!
Oh well, I did see my first peacock butterfly of the year and a brown hare crouched fearfully as I passed by (pictured).
at 18:20 No comments: