A hectic week of uni meant a refreshing visit to the patch this afternoon was most welcome and the birds were certainly out in force. A lack of rain over the past week meant the Flood had started to dry up exposing some inviting muddy edges which look perfect for waders, it held just 9 Dunlin of note today but could be interesting to keep an eye on.

The river was surprisingly busy with at least 250 Wigeon and 50 Teal milling around along with 3 Goldeneye (1 male), 3 Little Grebe and a single Great-crested Grebe down towards Stodday. A couple of hundred gulls were bathing off Gull Bank but there wasn't anything out of the ordinary present, and the same was the case at Snipe Bog where there weren't any Snipe at all to be found, clearly all at the FAUNA reserve judging by the monthly flush counts!

Up until this point the birding had been pretty similar to previous weeks however like buses good birds come along in groups and this spell was started at the Wildfowlers Pool where a pair of Shoveler were present, as was the Green Sandpiper which was feeding in the channel that leads up to the river bank. Just over the bank on the marsh the flashes were holding an increased number of Little Egrets with at least 6 seen, and after a bit of searching the ever elusive  Greenshank showed itself briefly before disappearing back down a creek. Over the noise of around 1500 Pink-footed Geese feeding on the marsh (I failed to find anything of note amongst them) came the cronking calls of a pair of Ravens which leisurely flew over towards Glasson, leaving Rook as the only 'common' corvid species that I need for the patch year.

Freemans Pool was livelier than of late with 8 Tufted Duck and a few Teal and Wigeon, along with 4 Gadwall and a Little Egret on one of the back pools closer to the river. A pair of Goldeneye dropped in briefly before returning to the river where they had come from. A mixed flock of Redwing and manly Fieldfare were feeding along the edge of the Stubble Field with the usual pair of Grey Partridge, it is always a delight to see this species as Aldcliffe is the only place I see them now locally. 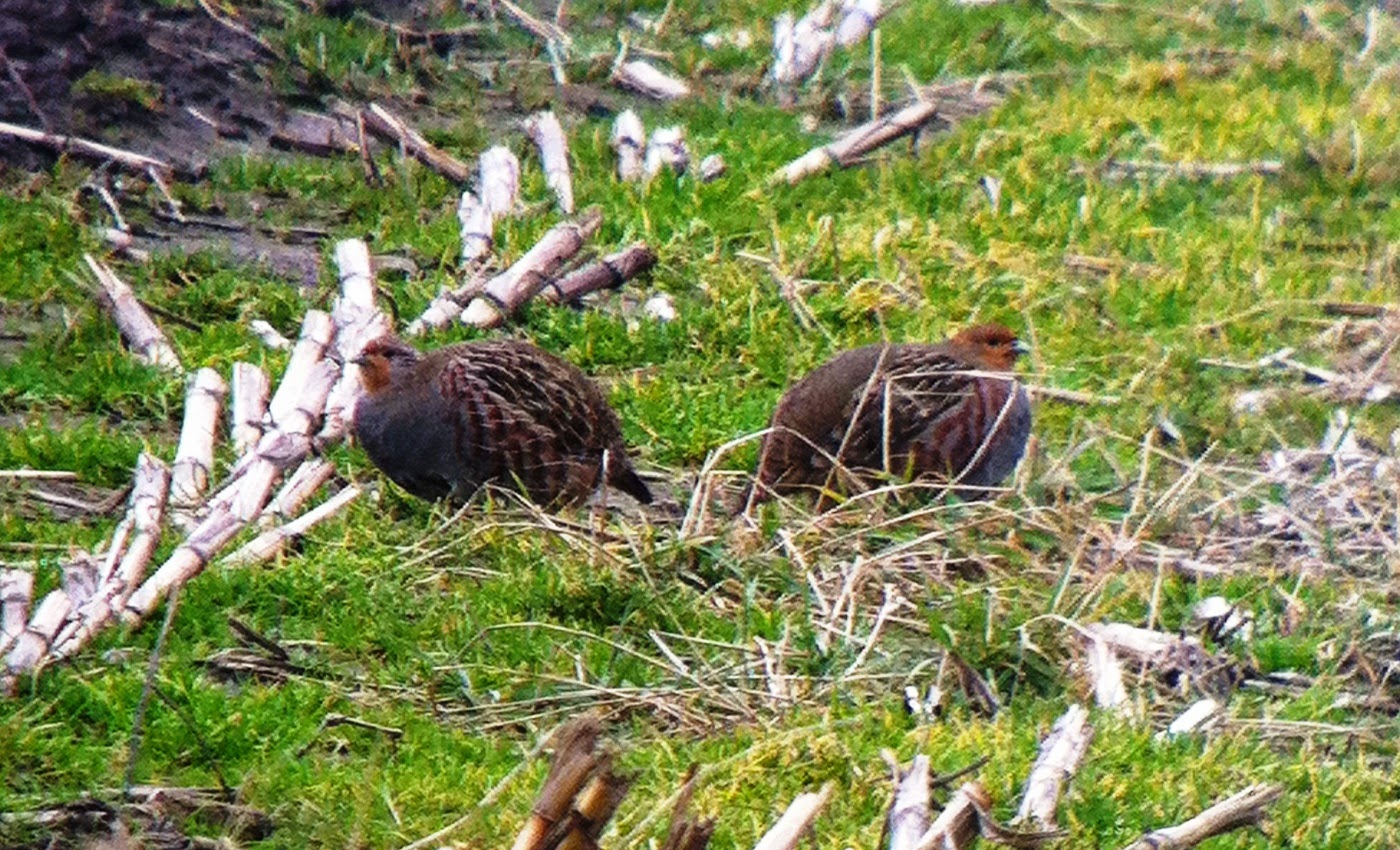 There was quite a lot of activity around the patch this morning and I enjoyed a great couple of hours birding Aldcliffe; there was certainly the feeling that things were starting to move around a little...

Freeman's Pools, now ice-free, was a little livelier than of late though a few regulars had yet to return. Five tufted duck were present along with just 6 gadwall, 3 wigeon, 5 teal and 8 mallard. Coot numbers were a sullen 16. A little egret and 2 grey herons were stalking the pool edges while a single oystercatcher was on the gravel island.

Scanning from Marsh Point, there was nothing too interesting among the preening Lune gulls and lapwings.

In the distance, large numbers of geese were wheeling around over the Heysham / Sunderland area and after a while some 3,500 or so came to alight on Aldcliffe Marsh. I 'scoped through them but found nothing but pinkfeet.
After some time grazing on the saltmarsh groups took to flying into the nearby fields where I later got another opportunity to scan through them. Still, there were no orange legs to be seen but I did find a neck-collared bird (pictured).
I'll post details of this goose's travels on here when I hear back...

Also out on the marsh were several little egrets (some already sporting breeding plumes) and the often elusive over-wintering greenshank (pictured) - a scarce bird in the Aldcliffe area outside of migration.
A trio of black-tailed godwit were feeding on one of the marsh scrapes too (also pictured). A fourth godwit was on The Flood along with a dozen teal and a handful of redshank.

The Wildfowlers' Pools held another egret, 10 or so teal, a couple of snipe and little else.
50+ curlew were feeding in the fields immediately east on the upper cinder path.

A pair of grey partridge were in the stubble field, where there was also a brown hare lolloping about.

On Frog Pond there was a pair of tufted duck and 16 wigeon.

After being escorted by two garrulous jays along the footpath, I was pleased to discover a flock of 14 siskin feeding in the alders by Willow Lane.

The highlight from my morning visit to Aldcliffe was the reappearance of a green sandpiper which was at the Wildfowlers' Pools.

The thawing waters around the patch had also enticed some other birds to return to the area. At Freeman's Pools a dozen gadwall were back in residence along with 4 wigeon plus several teal, coot and mallard.
Along with the sandpiper, the Wildfowers' Pools also hosted several mallard, teal, moorhen and a lone snipe.

Out on the marsh a flock of c550 pink-footed geese were grazing until spooked by the aerial equivalent of jetskis overhead. I did get time at least to confirm that nothing else was among them before they took flight.

The only notable thing amongst the large number of gulls, predominantly black-headed, was a white darvic ringed black-head but it was just too distant to read to digits.

Later, I had to pop into the RSPB office at White Cross and as I walked along the canal I got great views of a kingfisher and was able to point it out to a dad with his young son - the kid was made up!

On Wednesday morning, I'd spent a good 3 hours scouring the patch. At that point the pools were all completely frozen and totally devoid of birds.
The gadwall and teal had mostly moved onto the Lune where they joined 4 goldeneye and a huge number of greylags, Canada geese and approximately 600 pinkfeet. A great crested grebe and a handful of shelduck drifted along on the incoming tide.

As the tide rose, large flocks of lapwing, curlew, redshank, golden plover and dunlin wheeled around - even more so when bothered by the antics of a pair of peregrine and a female merlin.
A single rock pipit was pushed out from a rapidly filling channel, and a kingfisher zipped along the saltmarsh.
Around 20 skylark were feeding in the stubble fields.
I got great views of a stoat hunting along the upper cinder path in the morning sunlight.

Spring In The Step

I admit that the weather at the moment certainly doesn't feel very spring like, the temperature barely getting above 0 so far this week, however whilst birding around the patch today there was definitely a hint that spring isn't too far away. A number of lambs were bounding around in the field by Pony Wood to the soundtrack of 2 Great-spotted Woodpeckers drumming and patches of Snow Drops in flower amongst the trees. The Linnet flock had reduced down to about 15 birds and when a Sparrowhawk glided over a couple of Siskin joined the flock as they flew up from the tops of the trees.

Hundreds of Lapwings were feeding in the fields along Aldcliffe Hall Lane along with smaller numbers of Redshank and Curlew. The Flood had thawed out and held about 40 Teal but not much else, whereas the flashes out on the marsh were still mostly frozen and so there were only 2 Snipe in the Snipe Bog area plus a couple of Little Egrets. The walk down to Stodday and back proved to be uneventful other than another Sparrowhawk sitting on the benches along the footpath and a Great-crested Grebe feeding in the river. There appeared to be at least 100 Pink-footed Geese on the marsh towards Marsh Point with the usual Greylags and Canadas.

I had been informed by a dog walker that a Kingfisher had been showing in the ditch next to the cycle path and sure enough it gave beautiful views in the evening light fishing from the adjacent bushes. Just further along I had similarly breath-taking views of a Goldcrest feeding in the brambles not 5 foot from me, totally oblivious of my presence. 2 Grey Partridge were feeding on the northern edge of the stubble field next to Freemans Pool which had completely frozen over. Freemans Wood held a couple of noisy Jays but very little else just as it was beginning to get dark just after 5pm, a noticeable increase in birding on recent weeks.

Sparrowhawk, Siskin, Kingfisher, Goldcrest and Jay (plus a Peregrine over my house in town last week) put me on 72 species (75 points) for the patch year.

The monthly snipe count at the FAUNA reserve this morning was better than I'd expected. With the sub-zero temperatures and ice cover I'd assumed that most the snipe would have headed for the more saline environs of the saltmarsh, but no!
In total we counted 119 common snipe, 7 jack snipe and 3 woodcock. Not too shabby. While on the site we also added kingfisher, sparrowhawk, grey heron and brown hare as well as the usual common bits and pieces.
Nearby, the linnet flock was still very much in evidence with around 100 birds present, along with c20 chaffinch; there was no sign of the female brambling.

Later, I had a trundle along Aldcliffe Marsh and checked out Freeman's Pools. The few geese present were all on the Oxcliffe side of the Lune and with just bins I couldn't pick anything notable out among the assembled greylags and Canada geese. Similarly there were no yellow splashes on any of the swans' bills.
The Flood was bereft of birds and Freeman's Pools were frozen and all-but birdless; one tiny patch of open water had just 5 teal on it.