Owls about that then... 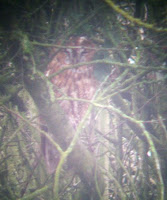 Managed a late morning / early afternoon wander around the patch.

Freeman's Wood was quietish with the only highlights being a jay, the roosting tawny owl (pictured, badly, left), a woodcock (my first here in ages, even though they're annual winter visitors) and the usual cluster of goldfinches and blue & great tits near Lucy Brook at the Willow Lane end.
Seemed to be lots of blackbirds around again...

3 bullfinch, and Guy McClellan, were by Freeman's Pools which were almost entirely frozen bar a very small patch of open water. On it were 8 coot, 2 little grebe, 5 mallard and, new in, 2 pairs of gadwall - the first I've seen in the Aldcliffe area since spring. A heron, 2 mute swans and a kestrel were here too.

A few snipe were in the frozen stubble fields and around the Wildfowlers' Pools, as were 5 fieldfare.

The fog on the marsh hindered viewing somewhat and the only geese visible were Canadas and 2 greylag.

An early finish allowed a post-work blast down to the patch, where I bumped into Steve W. who joined me for a bit of a root about. Soon after we also met Jenny & Jeff Butcher who were similarly on a wild goose chase.

The 4 European white-fronted geese were again with the greylag flock on Aldcliffe Marsh opposite Snatchems plus 100 or so 'new-in' pinkfeet. Further pinkfeet were wheeling around, with numerous birds seen dropping out of sight toward Oxcliffe.
When the whitefronts are head-down feeding amongst the greylags they can be pretty inconspicuous. The 2 adults are of course relatively easy to spot if their heads are up, even at distance. The 2 juvs can be trickier, though one has something a blaze developing while the other appears to have none. When feeding out in the open, the adults' dark belly markings are obvious, again the young birds lack these and can be harder to pick out. Their small size and distinctive head shape can be a giveaway even at range, and indeed this was what alerted me to their presence yesterday - worth bearing in mind when trying to locate them in the low winter sunlight!

Thanks to Jeff Butcher for the above pic .

What appeared to be a ruff flew over from the direction of the Flood toward the tip but too brief a view didn't allow absolute confirmation. Really can't imagine what else it could have been...

Freeman's Pools: All the usual suspects, fem scaup (now starting to resemble an adult) plus 5 shoveler, 3 wigeon, 3 goldeneye, 2 little grebe etc. A small flock of meadow pipit were nearby.

6 snipe by the temporary pool in the field over the road from the Flood.

3 bullfinch along the cycle track were only notable passerines.

The Freeman's Wood tawny owl was in its usual roost.
at 16:13 No comments:

A mid afternoon amble with Jenny saw the following highlights:

A good find came in the form of 4 European White-fronted geese (2 ads, 2 juvs) feeding amongst the 300ish greylags on Aldcliffe Marsh (1.45pm).
A little egret was nearby.

A little owl was in the Admiralty Wood.

Of note: at least 60 wigeon still on Frog Pond yesterday but none this afternoon. The roosting tawny owl was still there yesterday too.
at 14:49 No comments:

Managed a bit of time out for a lazy early afternoon trawl around the usual key spots.

Freeman's Pools: the regular 1stw fem scaup still present and showing well in glorious sunshine.
Otherwise, a male shoveler, a single female wigeon, 5 goldeneye (1 ad drake), 2 little grebe, 1 snipe, just 8 coot, 4 mute swans and a bunch of mallard made up the supporting cast.
Frog Pond: The highlight of the day was the unprecedented sight of 45+ wigeon on this smallish pool. I imagine they'd been kicked off the marsh by shooting activities. The regular mute swan pair were also here.
Wildlfowlers' Pools: Quiet, just 4 teal and a load of mallard.
30 or so meadow pipit & 1 pied wagtail were feeding on the wet fields. 4 snipe were in 'reedy corner'.
Very few passerines were noted along the cycle track. The number of blackbirds has really gone down and there are few tits and common finches to be seen or heard. Only the territorial robins and dunnocks are evident.
The tawny owl discovered by Guy last week was again at its roost.
at 13:58 No comments:

After failing to get to Aldcliffe yesterday I felt in desperate need to spend a bit of time there this morning but it was pretty quiet down the old patch, thanks mainly to the blustery wind which seemed to have the effect of making everything seek cover.

The 1st w female scaup was roosting on the island at Freeman's Pools alongside a pair of drake shoveler. Also present were the 3 regular 1stw-type goldeneye plus a pair of smart adults (m&f) on the top pool, 1 little grebe and the usual (though notably reduced) scattering of coot & mallard.
The Wildfowlers' Pools were quiet but for the large numbers of mallard and a few moorhen.
Other than an audible but invisible group of long-tailed tits the cycle track was pretty birdless, and the marsh seemed quiet too.

Stop Press
Thanks to Guy McClellan who texted with the discovery of a roosting tawny owl in the Freeman's Wood area.
Zipped down to have a look and found it - though it wasn't all that easy, so big thanks to Guy for his great instructions! Worth keeping an eye on it in case it's a regular roost, it might come in handy on New Year's Day...

OK, so it may just be on the fringes of the Aldcliffe patch (though in my defence I was the one that made that up) - but I didn't get chance to cover the patch today so the 3 waxwings that graced my street can be justifiably posted here!
2 were seen by the nursery as I came out of the house at 11.40am, and I immediately dashed back in for my bins for a proper look at them, abandoning all thoughts of the post office and the parcels I had to collect.
Called Dan H who popped round the corner in a matter of seconds and we were treated to good views of one very mobile bird in particular.
The local mistle thrushes seemed particular vexed by the crested interlopers.
Later (1.05pm), 3 were together in the same area before flying off up Ays-Garth Road. Had a wander around trying to find a suitable feeding spot but that was the last I saw of them.

Oh, and to further enhance my 'house-list' a party of long-tailed tits made their debut around my 'feeding station' in the front garden. Nice.
at 16:08 No comments:

Back on the patch...

Apologies for the lack of postings of late but I've been on Madeira, escaping the pre-Christmas madness and adding the endemic pigeon and 'crest to my list, oh and plain swift too (which I'd missed on a trip to Tenerife in December a few years back). And after a week of enjoying the lovely Madeiran firecrests I came home to discover a goldcrest by my birdtable - a garden tick!

Anyhoo, enough of that. Got back just in time for my WeBS count which I did in reverse for a change - Conder to Aldcliffe.

General highlights will be on the LDBWS site - I'll just stick with the Aldcliffe patch notables here.
12 shoveler were on Freeman's Pools as were 3 goldeneye but no sign of the scaup - did this leave as a result of the 'big freeze' last week?
A rather remarkable flock of 177 oystercatcher and 98 black-tailed godwit came up from the river at Marsh Point and started feeding on the grazed area on the old tip.
2 little egret, 5 pinkfeet & 276 Canada geese were on Aldcliffe Marsh, while a large number of greylags (200+) were grazing in the fields to the east of the river - my attempt to count them accurately was thwarted by an aircraft that flushed them before I got to a spot where I could do so, and they then headed off in the direction from which I'd just come. Darnit.
Admittedly, all the best birds were outside the patch area today... and I didn't have time to bash the miles of potential LEO-hiding hawthorns. Bet there's one in there somewhere. But I've been saying that for years...
at 16:04 No comments: