The Return of the Irish Plover

Spent an hour or so before work yesterday morning checking out the usual spots around the Aldcliffe patch.
I must have been channeling Mystic Meg while writing my last post, as I had so accurately predicted the arrival of the year's first little ringed plover. One was on the wet fields by the Wildfowlers' Pools alongside a group of dunlin. In fairness, it was a fairly safe bet that one would arrive around now as the first of these diminutive long-distance waders usually appears a day or so either side of St Patrick's Day.
Also in the area were at least 4 pintail (commuting between the WP's and The Flood) and a dozen or so black-tailed godwit. 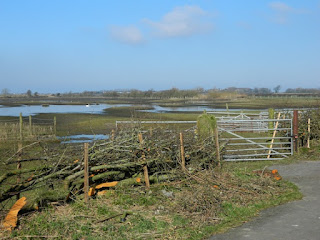 Quite a bit of hedgerow improvement is underway around the Wildfowlers' Pools at the moment.
Naturally, this does cause a little bit of disturbance but the majority of birds don't appear to be overly bothered, simply moving further toward the centre of the fields.
On the plus side it really has opened up viewing of the pools from the cycle track, though the short-term downside may be that it will be too 'open' for some birds to deal with. Time will tell.

Having spent countless hours thrashing around in Freeman's Wood over recent weeks in fruitless search of the firecrest I was surprised to practically bump into it today when I least expected it.
It was actively feeding in a scrubby patch of woodland just to the south-west of the football pitch, within the fenced area. It showed well for a couple of brief minutes before melting away into a dense patch of brambles.
(Gav Thomas and I had another look for it late afternoon / early evening but other than flushing a woodcock we came away pretty much birdless).

With a fair amount of much-needed hedge-work going on by the Wildfowlers' Pools, the area was a bit less birdy than it has been of late. Few waders were on the flooded fields (just 3 black-tailed godwit and few redshank, lapwing and oystercatcher) though there were still some wildfowl hanging in there. Around 30 coot were in the deeper water while a peak count of exactly 30 gadwall (an Aldcliffe record?), 3 shoveler and a pair of pintail were the notable highlights.
A singing common chiffchaff was in the hedgerow but again, the Siberian chiffchaff was nowhere to be seen.

Given that little ringed plovers have returned to Aldcliffe on the same date of March 19th for the past two years (March 17th in 2013), it's fair to expect that given the calm weather forecast we may well get our first of 2016 in the next few days. With so much appealing habitat available at the moment, my bet is that one will show up on the Wildfowlers' Pools before the weekend. Mind you, I'm a terrible gambler so don't set off to Ladbrokes just yet...

I walked back along Dawson's Bank but there were no geese (see Jean Roberts' post from a few days ago here) or much else for that matter. Even the reliable redpoll were absent.
A singing 1st year male reed bunting was at the still very flooded Bank Pool. Given the glorious weather I was surprised that no lapwings were displaying over the maize fields today. As futile and unsuccessful as it will doubtless be, thanks wholly to the farming practices employed here these days, it will be interesting to see how many nests we have here this year.
Maybe, just maybe, the birds will actually hatch some chicks before the tractors roll in.

Freeman's Pools were fairly quiet with no sign of the recent drake scaup. There was still a decent number of wigeon and a pair of goldeneye present, along with half a dozen tufted duck and a couple of little grebe.

As I neared home, a pair of dancing small tortoiseshells represented my first butterflies of the year. It would seem that spring has officially arrived!

The Sound Of Music

That rarest of things happened today. My day off coincided with the best weather forecast for the week. And so it came to pass; it was cold and crisp, bright and sunny and still. Perfect.
I headed off for a scour of the Aldcliffe patch early doors and pretty much had the area to myself (one of the benefits of working at weekends is that I get days off when there are fewer dog-walkers, cyclists and what-not around).

Freeman's Wood was alive with the sound of music; birds were singing all over the place. Song thrushes, robins, dunnocks, wrens, great tits, blue tits and goldfinches were all belting it out.
The wildfowl at Freeman's Pools had diminished a bit with no diving ducks present on the main pool at all. Around 40 wigeon were there but were rather unsettled by the incongruous sound of firework rockets going off from somewhere near the Lune Industrial Estate.
Little grebes were 'singing' and a pair of oystercatcher seemed settled on the island - they regularly nest here. A cluster of 12 snipe were also on the island. A pair of tufted duck were on the upper pools.

I walked along Dawson's Bank toward Aldcliffe Hall Lane, scanning Aldcliffe Marsh as I went. To my left, a few pairs of lapwing were displaying over the maize fields.
The flooded Wildfowlers' Pools were still busy with waders but the morning light was against me and most of the birds flushed before I got chance to check through them all.
There were certainly fewer birds here today than on my last visit, the bulk being redshank and black-tailed godwit.
A foraging finch flock on the tideline comprised 30+ goldfinch and at least 9 lesser redpoll.
I got fabulous views of a hunting stoat who was rather ambitiously stalking a couple of wood pigeons near Walled Meadow.

The only duck on The Flood was the drake scaup! In fact other than 6 shelduck and 4 redshank there was nothing else doing at all. After a while the scaup flew off and headed for the Wildfowlers' Pools.
In the hedgerow near the Pools the Siberian chiffchaff was busy catching invertebrates while nearby a common chiffchaff was singing intermittently in the warm sunshine.

Late morning I headed to FAUNA for our monthly coordinated snipe count. Along with a record count of 153 common snipe (though some may have involved re-counts) we also counted 7 jack snipe and 2 water rail. 13 teal were in School Pond and a brown hare was in Big Meadow marsh. Not too shabby.

Following a report of a drake scaup from the flooded Wildfowlers' Pools on Monday (courtesy of Javier Caletrio via LDBWS site), I trundled down to the patch to see if I could relocate the scarce duck this morning.
First I checked Freeman's Pools but there were few ducks there; twenty or so wigeon, 4 gadwall, f few each of mallard & teal and a couple of goldeneye. Three little grebe and a little egret were also present but no diving ducks.
A pair of tufted duck were on Frog Pond, and the Siberian chiffchaff was in its favoured haunt.

There were fewer black-tailed godwit on the W Pools today, with around 140 busily feeding in the shallows. At flock of at least 200 redshank made for an impressive sight, while just 30ish dunlin remained.
A pair of shoveler were 'new in' while teal numbers had gone down since my last visit a couple of days ago.
A few gadwall were dabbling in the deeper water but other than a pair of goldeneye there was no sign of any monochromatic diving ducks.
I walked along Dawson's bank back down to Marsh Point, stopping to 'scope the couple of hundred pink-footed geese on Aldcliffe Marsh. Checking the flooded fields from the bank revealed little more than I had seen from the cycle track.

A scan through the gulls at Marsh Point was uneventful but the sight of a group of tufted duck on the upper Freeman's Pools at least gave hope. A quick look proved them all to be tufties...
Yet more tufteds were with a small number of wigeon at the eastern edge of the pools and a brief binoc view came up trumps. There, among the commoner aythyas was a handsome drake scaup. Lovely.
These birds are genuine rarities in the Aldcliffe area (indeed in the Lancaster & District recording area) with very few records locally. A drake was on the Lune in October 2015, while a couple of long-stayers included females in 2012 and 2008.